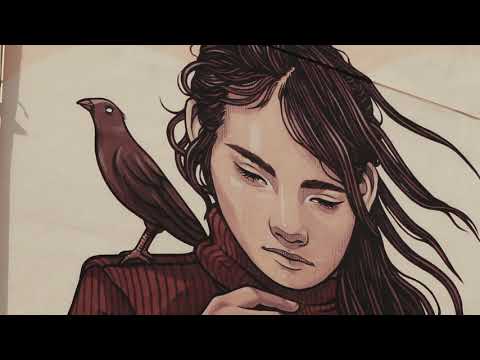 From the 4th to the 10th of April 2022 we will celebrate the second edition of the Lleida _potFest Urban Art Festival. In this edition we have moved to the la Bordeta district to fill with color different spaces of this emblematic neighborhood of the city of Lleida. Come see us to share and enjoy the experience live! Don't forget to stop by the Historic Center to rediscover the works of the previous edition and to experience live the creation of a new mural that we will add to the area! 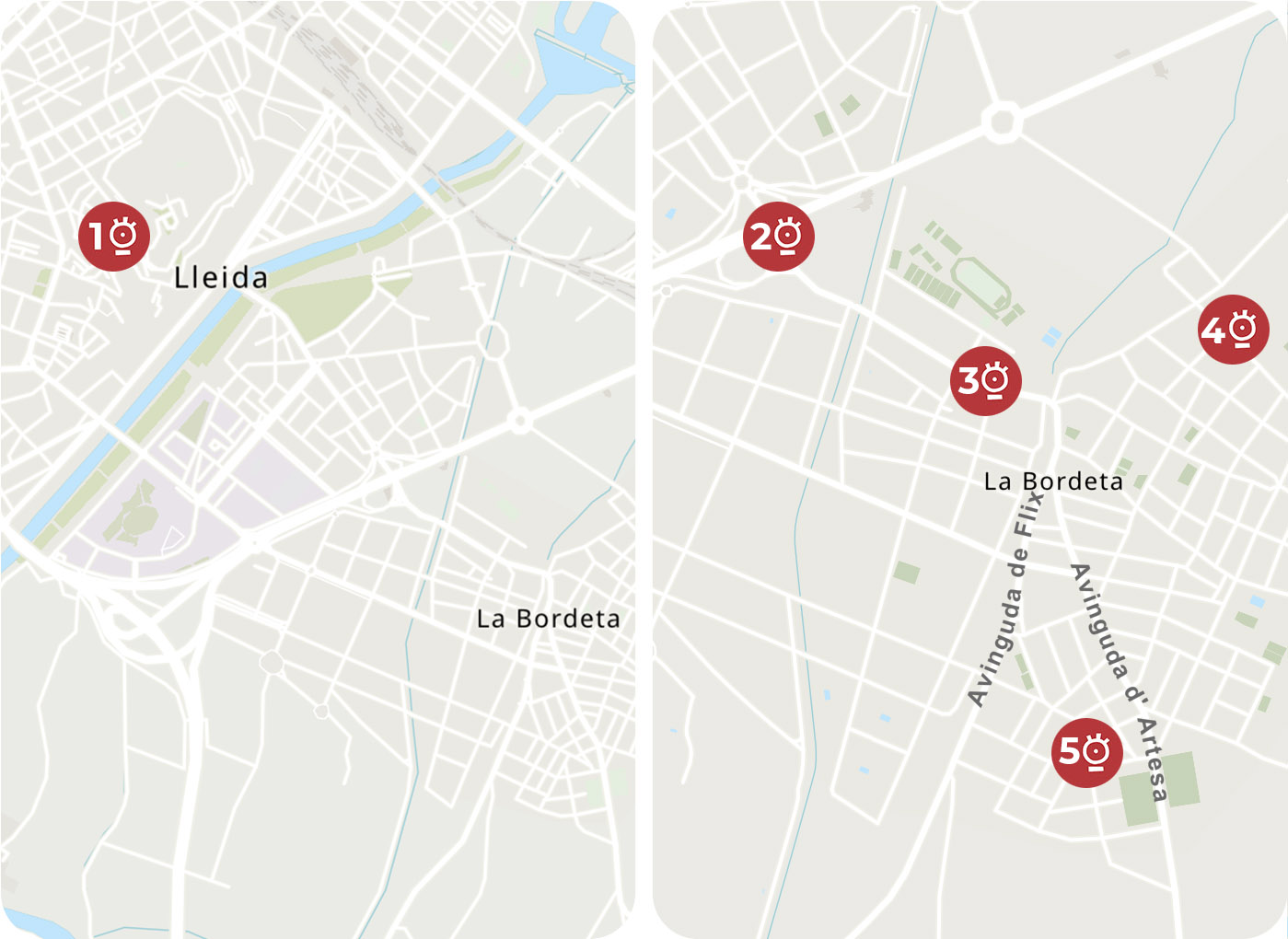 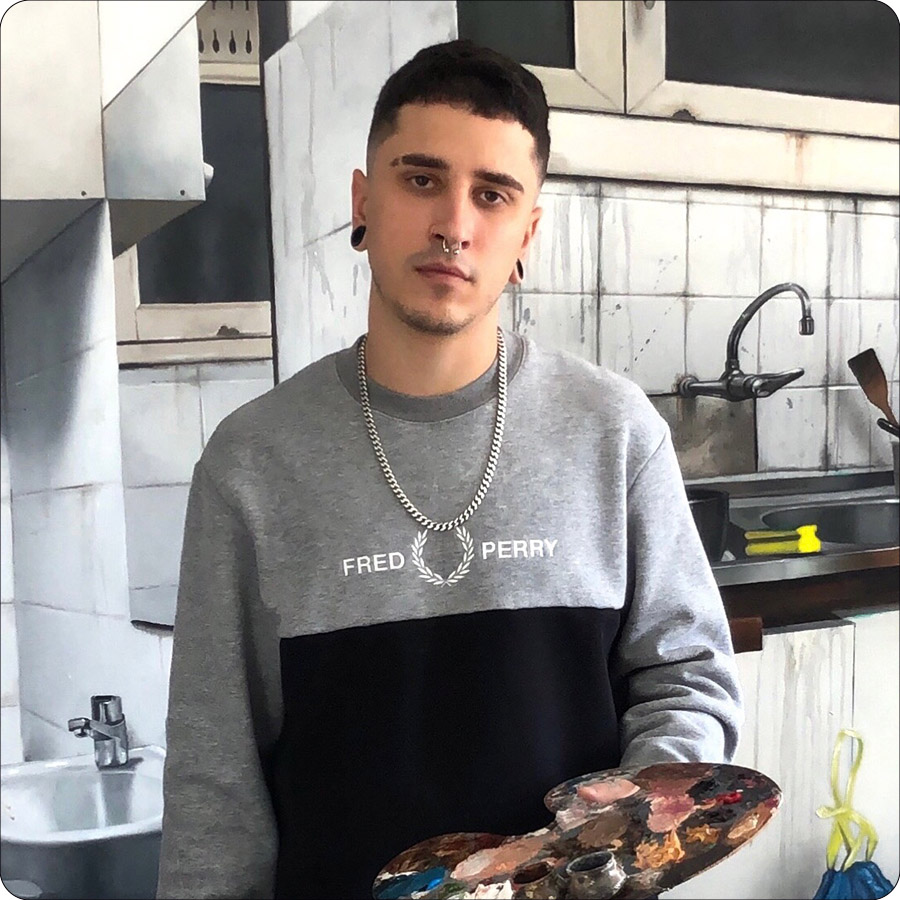 Albert Bonet Florensa, born on March 23, 1996 in Riba-roja d'Ebre (Tarragona). From a very young age, his only passion has been drawing and his concern is graffiti and painting. He studied artistic baccalaureate at the Episcopal College of Lleida in 2014, obtaining excellent results in all artistic subjects and a grade of 10 as a final project. This stage closely linked him to our city to which he has always referred. During this stage he was selected in the DKV 'Fresh Art' Young Art Competition, where he was awarded an honorable mention at the Polytechnic University of Valencia in 2015. He then moved to Barcelona where studied one year of the GRAPHIC ART course at the 'Escola Joso' Comic School (2016). By offering to advance a course to a higher level than the rest and together with the motivation of some teachers of the school, they convinced him to go to another academy more focused on art in the natural and realism, so the following year began a year at the '' Barcelona Academy of Art '' (2017). At the end of the course at the age of 19, he was offered a job in a renowned tattoo studio in Barcelona, ​​'' Blessed art tattoo '', where he quickly made a name for himself by tattooing footballers such as Neymar and Luis Suárez. At the same time, he spent all his free time and earnings on tattoos painting in oil with the best materials without worrying about conditioning his aesthetic or message to sell, receiving painting commissions from celebrities like Leo Messi, or doing commissions for well-known national urban music artists. In 2019 he had his first serious solo exhibition at the Melià Hotel in Sitges. In 2020 he was selected to exhibit at the Kronos Art Festival in Barcelona, ​​in the Santa Monica space on Barcelona's Rambla, with artists such as Eduardo Chillida and Lita Cabellut. In November 2021 he opened a solo exhibition sponsored by CANNA, at the Galeria Mutuo in Barcelona, ​​with a large number of attendees. Finally, in December 2021, he was invited to take part in the Barcelona National Art Fair, which was held at the Maritime Museum, where he was awarded the International Painting Prize in the category of realism. 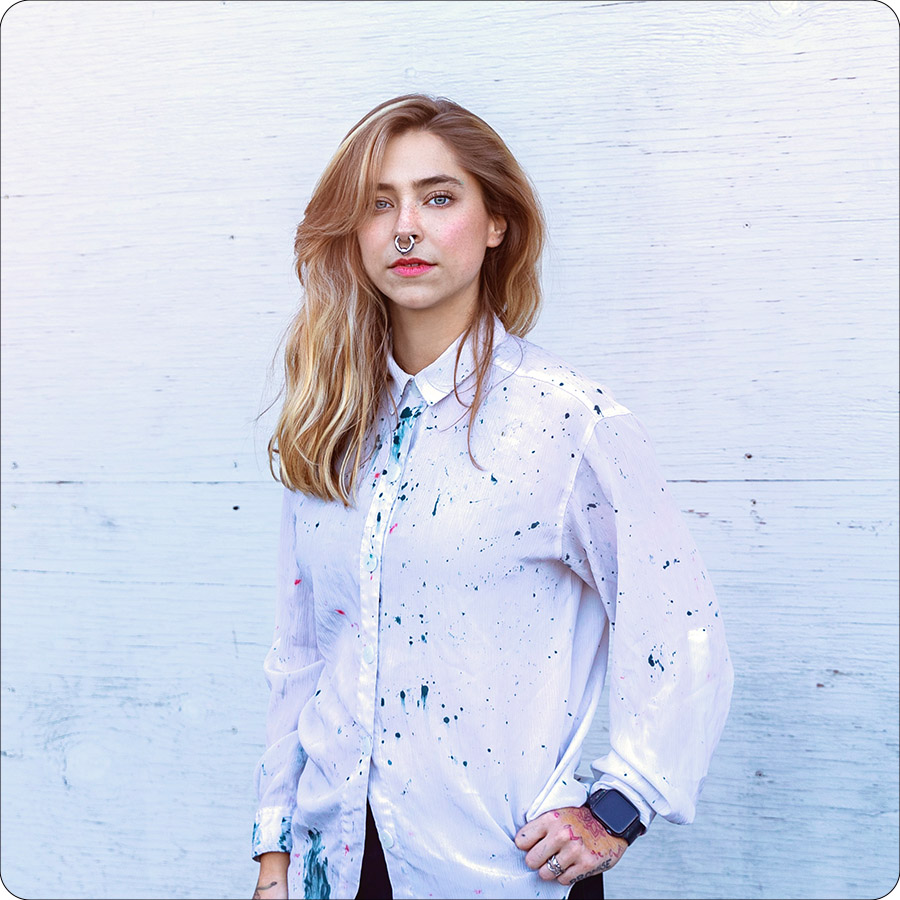 Mandi Caskey, also known as Miss Birdy, is a muralist, gallery artist and community activist. She is originally from Lima, Ohio, United States of America. But he moved to Columbus to study at Columbus College of Art and Design, where he currently resides and where he has worked in mural art and other disciplines since 2014. Caskey decides to focus on creating images that force the viewer to look outside their mental and emotional world. Using a variety of different media, the work of art moves away from the artist and takes on a life of its own. Caskey's mural work often leads to a fantasy world that takes over organically from any environment and effortlessly changes the impact of a space. As a gallery artist, Caskey enjoys painting quickly and freely with oils on wood that he cuts into his carpentry. The pieces tend to have a more realistic tone, which brings a creative balance to the artist. When Caskey works on community issues, he does so in conjunction with local activist Brian Suiter, with whom they created Catalyst Columbus, Columbus ’first mural foundation that focuses on bringing murals and public art to everyone every day. In a new effort, Mandi Caskey has started an art consulting role for The Fort (www.thefortcolumbus.com) at Columbus Center for Modern Art Creators, where she will help coordinate walls, gallery shows and events in space. 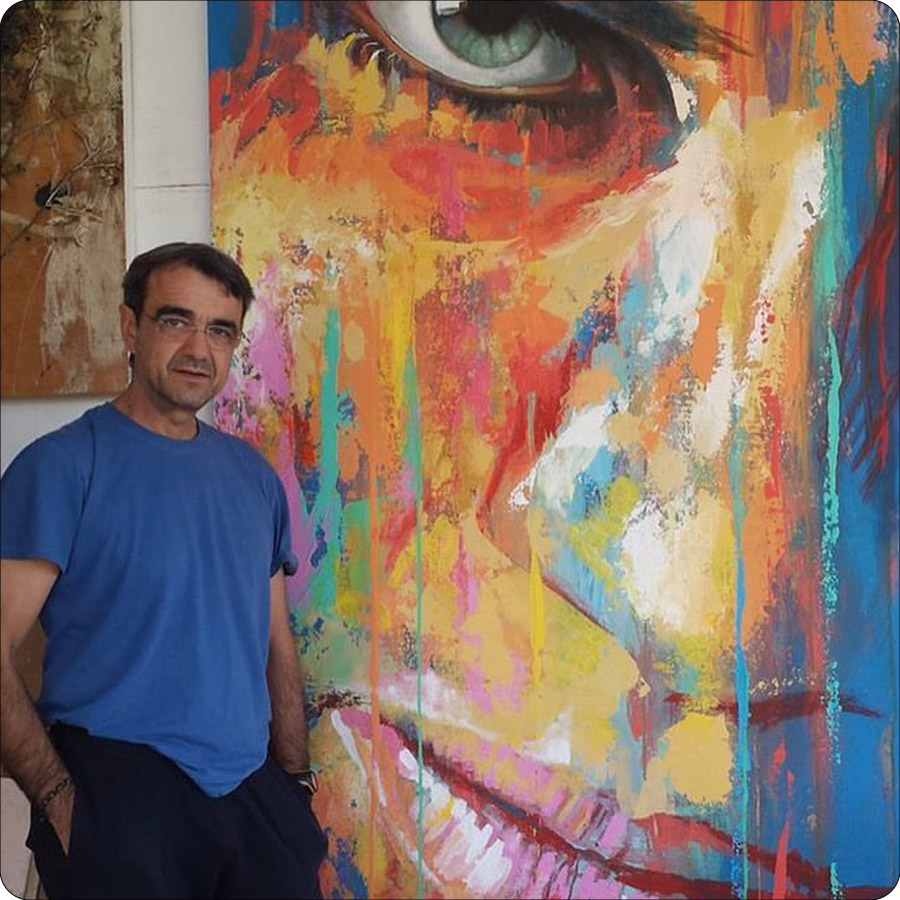 Painter by profession, urban artist by heart and sculptor in his spare time. Professor at the Faculty of Fine Arts of Murcia. In 2008 he was awarded the National Prize for Fine Arts (National Awards for University Education) by the Ministry of Education and Science. Callizo's style can be classified within what is known as Spontaneous Realism; the gesture and the fluency of the stroke are characteristic of this style, which here are combined with exuberance of color and abundant load of pictorial matter. They are works with a warm and enveloping atmosphere where the author creates a focusing effect, creating a contrast between the realism of some areas and the disintegrated and broken atmosphere that surrounds it. In his urban work, he stands out for his strong chromaticism, the use of tools that are uncommon in this field, such as palettes and spatula palettes, and for the use of the volume of industrial paintings as a more expressive element. He has carried out a large number of large-format mural and live painting projects in countries such as China, Turkey, Poland, France, Aruba and throughout the country. 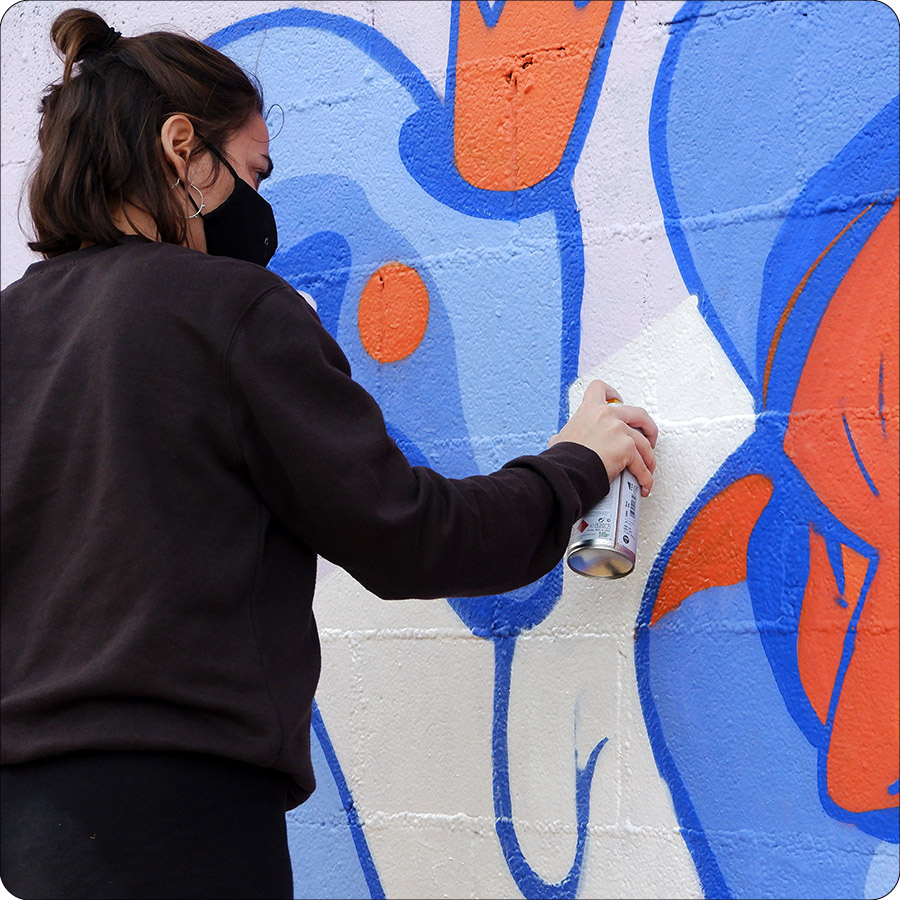 Graduated in Fine Arts from the Universitat Politècnica de València (UPV), she first came into contact with urban art in 2006, although it was not until late 2020 that she was able to prioritize the mural over other works, participating in festivals such as the More Than Walls of Sagunto, Wall Lab of Wallspot or the Women of Science of the UPV among others. She has collaborated with projects by Médicos sin Fronteras, Wallspot and the International Women and Cinema Biennial. He works mainly on issues related to corporalities and the link with the places where he carries out the interventions, as well as the dialogue with the spaces and the neighbors that inhabit them. He is currently working professionally in illustration, concept art, comics and muralism as a freelancer living in Barcelona. 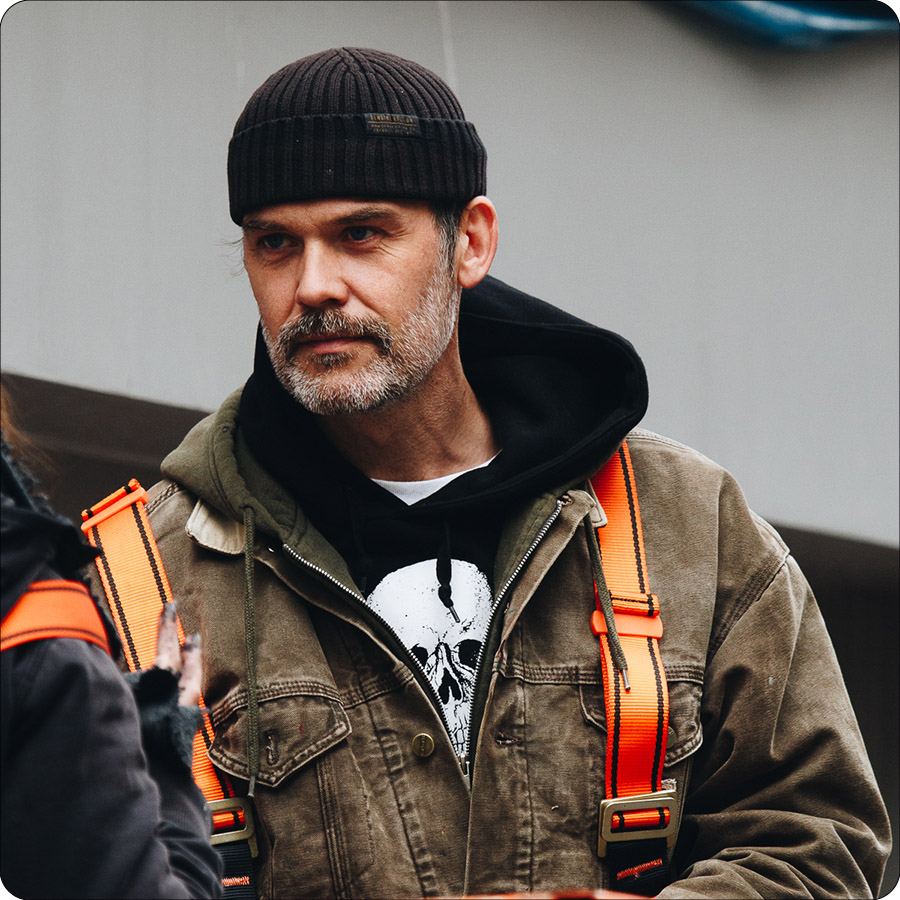 Maclaim is a well-known German urban artist. His works are well known all over the world, gaining great relevance and popularity in recent years. And it is that he has a style that is really unique, as well as a great talent; he creates true works of art that combine the realism of photographs with the most absolute surrealism in a brilliant way. Maclaim is a member of a well-known organization that seeks to promote the photorealism of urban expression. One of his most acclaimed works is a piece that the German artist painted at the opening of a skate park in his hometown; a drawing in which great realism is observed and in which we can see an elephant next to a child; it is a bit shabby as the elephant's trunk is attached to the little one's nose. The artist was born in 1979 and grew up in East Germany. He graduated in Art Restoration and Conservation from the University of Applied Sciences in Erfurt. His first contact with urban art took place in the mid-1990s. However, Maclaim's origins as a street artist can be traced back to 1999. At that time he teamed up with CASE and Rusk, and all three began making a large selection of projects. This group of young talents created some of the best photorealistic graffiti in the world. Until Case Maclaim became involved, street art was characterized by a rather caricatured style with a predilection for typography. In the late 20th century, the German artist surprisingly put an end to this trend with his Maclaim Crew. What's more, Maclaim is considered the godfather of photorealistic street art today, the man who blurred the line between graffiti and painting.